Coordination: The Institute of Fluid Mechanics of Toulouse (IMFT)

This "Avion" use case is part of the DATANOOS Alliance dynamic to contribute through a multidisciplinary action to an "enriched" and "intelligent" modelling of data concerning aircraft trajectories for all phases of flight (takeoff, landing and cruise), existing and improved using the wing morphing of the future.

The objective of the "Avion" use case is to contribute to the creation of a platform for the accessibility and sharing of aircraft trajectory data according to the FAIR (Findable, Accessible, Interoperable and Reusable) principles of the European Commission (H2020 programs).
Data sharing (initially restricted to the partners of the Aircraft CU) aims at eventually "open access" to part of this non-confidential data, by specifying the legal rules of accessibility and use in the context of Open Science principles, in partnership with the Institute of Private Law (IDP).

In a second phase, algorithms will be made available by CERFACS, IMFT and other partners.

Cross-fertilization of the data

Cross-fertilization of these data required the following steps: 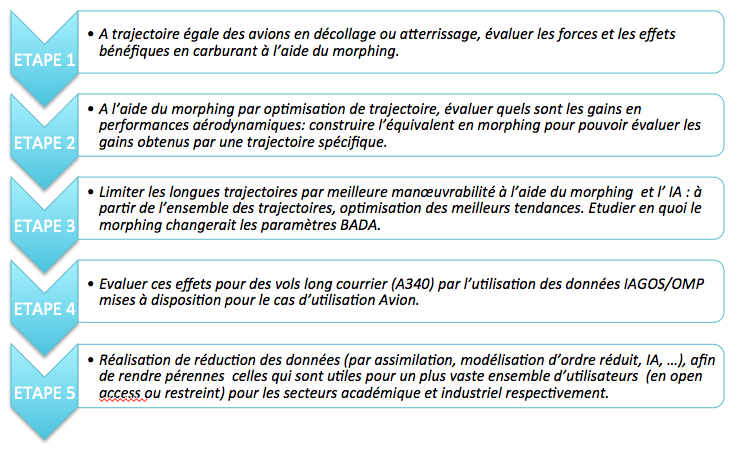 An ontology structure is being finalized, allowing access to and interoperability of these data.

Within a demonstration ontology, a service composition algorithm is being developed that will allow for increased cross-fertilization between data, and advancement in the improvement of aerodynamic approaches through the exchange of these data, their metadata and their reusability.

The use of IRIT's OSIRIM calculation platform is also planned for the generation of part of the numerical simulation data in addition to those produced at CALMIP.

Members of the alliance's DataCore center of expertise are working with Avion use case partners to consolidate and capitalize on this approach.